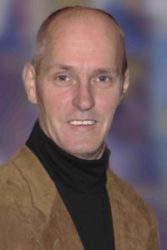 John Worrell….Co-Owner
….brings diversified training to the Amy Tyler School of Dance. As a teacher, he offers a unique, memorable style that makes his classes a favorite among the students and parents alike.
Dancing for over thirty years now, John started his career in Los Angeles with The Concert Dance Theatre. It was there that he received professional performance experience by dancing is such productions as Babes in Toyland, Les Patineurs, The Nutcracker and Swan Lake. At twenty-two years old, he discovered his ability to teach when he joined the Mills Street Dancers as principal performer and a teacher. Three years later he auditioned and landed a job as a featured dancer in a prominent national touring company production of Heart Strings, where he was fortunate enough to work alongside stars such as Tommy Tune, Joel Gray, Sandy Duncan, Christopher Reeve and many others. Not long after the show closed, John came to Long Island to perform in Theater Three’s production of 42nd Street where he met his now wife Amy.
In 1991, John and Amy co-founded Harbor Ballet Theatre, a local not-for-profit ballet company dedicated to giving dancers of all ages the opportunity to perform in professional ballet productions. As executive artistic director John is charged with hiring, teaching and providing designers for Harbor Ballet Theatre’s annual production of The Nutcracker. In 1996, John and Amy started an intensive six-week summer program for serious ballet students. John continues to stay involved in the community as the technical director for Port Jefferson High School’s theater department. Working with children on stagecraft, lighting design and all aspects of backstage work.